Fifteen months after weight loss surgery, my daughter Maisie-Jane was born. I could not have asked for a better gift. I've also got my confidence back, I have more energy, and I'm obsessed with clothes! In fact, when I first went into Next, the shop assistant rushed into the changing room when she heard me scream. She needn't have worried, I'd just screamed: "A size 16 fits me!"

I come from a big family, everyone is large. I suppose I was expected to be big as well because then we could say it was "in the genes". I have to say, though, that as a child I had a terribly unhealthy relationship with food; it was my best friend and I 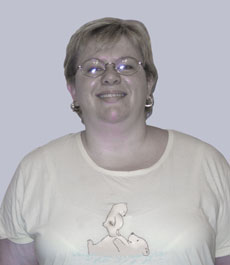 used it to help me cope with every emotion I had - bad or good.

One of my earliest memories was when, as an eight year old, my headmaster put me on a diet. In assembly every week we had a weigh in. Those who had lost weight were given a book token and those who hadn't, had their results read out in front of the whole school. This inevitably meant that larger children, including myself, were laughed at constantly and during lunchtime, we would be asked: "Are you allowed to eat that?" by the other children.

Also, I was sexually abused, by a teenage boy, when I was eight. It made me scared to go outside and so I chose to stay in the safety of my own bedroom, where I would eat and often hide food. I didn't tell my parents at the time because the boy had threatened to kill my brother if I did - and at eight years old you believe things like that.

To compensate for my size I developed a "jolly fat person" persona. I was actually quite shy, but I thought if I acted in an extrovert manner it would, in some way, make up for my size. I got involved in amateur dramatics but strangely enough, I never got picked for the lead! I was picked to play the old woman or got shoved to the back of a group.

The changes weight loss surgery make to your life may often not mean much to "normal" people because they take so many things for granted. But these changes are the things that make life wonderful again. For instance, we went to Disneyland Paris last year and I cried on the plane because I could fit into the seat. My weight loss has also had such a positive effect on my marriage. As I said earlier, my husband has always loved me regardless of my size, but since my operation we've been able to do some many more things together.

Please don't think, though, that surgery is a quick fix - it's not. It will undoubtedly change your life, but you have to use it as a tool, not a simple cure. You can't carry on eating the same old amounts of rubbish because, if you do, you will eventually put the weight back on. You need to change your attitudes to food itself as well. If you get the chance to see a psychologist or talk to someone about why you eat the way you do - then I would beg you to do it. I grieved after surgery because I had lost my best friend - food. I had nothing to depend on in the same way anymore; you will have to be prepared for that. Maisie-Jane's birth would probably never have happened if I had not had surgery, and for me that's the best thing, but remember I have worked hard at changing my attitudes to food too. It's my life and my body - as are yours too.