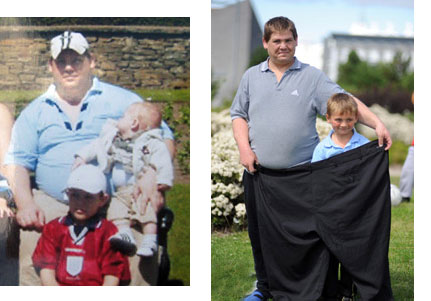 At his heaviest, Michael Wareing, 36, a father of five from Blackpool, weighed 30 stone and had a dangerously high body mass index (BMI) of 68.

He found it difficult to walk, had weight-related depression and suffered from various health problems, including diabetes and high blood pressure.

He also suffered from sleep apnoea, a potentially life threatening sleep disorder, which meant he had to use a CPAP* special machine or pump at night to force air into his lungs to stop his airways collapsing.

“There were times when I felt I just couldn’t cope anymore,” he says. “I was constantly out of breath. I found it difficult to control the children or take them out.  I couldn’t go shopping without having to stop every few paces. I had absolutely no self confidence.  What made it worse was that I couldn’t talk to anyone about how I felt.”

Although he wasn’t particularly heavy as a child, Michael started to pile on the pounds after a series of setbacks in adulthood left him at an all time low and without a job.

“I became increasingly depressed, ate really unhealthily, drank too much beer and ended up having a nervous breakdown,” he says.  “I had to give up my job and lost all my self esteem.”

Concerned about her son’s health and wellbeing, Michael’s mother Janet suggested that weight loss surgery might be a way forward. “A friend of mine had had weight loss surgery and it made a huge difference to her,” she said.   “I thought it might help Michael.”

Michael approached his doctor, who referred him to specialist bariatric (weight loss) surgeon Rob Macadam at weight loss surgery specialists Phoenix-Health, which have a clinical centre at Fylde Coast where they provide a wide range of weight loss procedures and aftercare.

After assessing Michael, Mr Macadam recommended that a sleeve gastrectomy would be the best weight loss surgery procedure for him.  The operation, funded by the NHS, was subsequently carried out in August 2010 by Mr Macadam.

“The surgery went well - Mr Macadam was amazing,” says Michael.  “Since the operation, I’ve lost over eight stone in six months, gone from a size 5XL to an XL and am still losing weight. I feel 100% better.”

According to Rob Macadam, Michael has done ‘fantastically well’. “Michael has made amazing progress,” he said. “His diabetes has gone, he is far happier and his sleep apnoea is much improved, which means he doesn’t have to use a machine to help him breathe at night anymore.”

These days Michael is also healthier and much more active.  He goes to the gym two or three times a week, loves walking his dogs and plays football with his children, who range in age from 5 to 17.

“Before the operation, I loved pizzas, burgers and fish and chips but now I eat far more healthily and have cut out the beer,” he says.

“If I hadn’t had the surgery, I probably wouldn’t be here today.  I hated the way I was before.  I was so depressed – my weight really got me down. But weight loss surgery has transformed my life.  I’ve got my confidence back – I can do so much more.   I’m a totally different person. I feel happy again. It’s absolutely brilliant.”