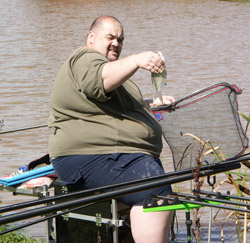 By the time I hit 33 stone, I was so desperate to lose weight, I asked the doctor to wire my jaws together. My mobility was limited to a 100 yard walk. I wasn't registered disabled but I might as well have been.
The worst thing was not being able to play football and stuff with my kids.I've now lost 20 stone after a Reux-en-Y gastric bypass operation. I take part in mountain bike marathons, go camping with the family and I bring a smile to my son's face when I coach his football team.

Chubby - that was me as a kid; chubby and picked on. I came from a home, like many kids in the 60's and 70's, where you ate what was put in front of you and if you didn't you were reminded about starving children in Africa. I was also a "latch-key kid". My parents both worked hard, so I had to look myself and my sister and became adept at getting things out of the cupboards, especially chocolate, with which I started a life long love affair.

By the time I became 11 or 12 I discovered sport, in particular, rugby. It turned out I was really good at it. Along with that, I joined the Air Cadets and went to Slimmer's world with my mum. These activities along with squash and badminton kept me fit. I went from 14 stone 7 pounds, down to around 11. I was still eating a lot but it didn't matter because I was burning off all the calories.

I imagine I would have carried on this way had it not been for the serious injury I sustained playing rugby when I was 17. As a result of a scrum collapse I damaged my neck, bruised my spinal cord and left me paralysed for a short time. I had to wear a brace for six months and exercise was out of the question. During this time, though, I didn't change my diet and without any way of burning off the calories, my weight crept up to 13 stone 7 pounds. 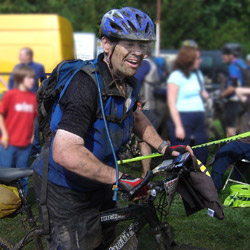 By the time I got to University, I was still playing a bit of rugby but college life kept me too busy to really concentrate on sport. That pattern carried on when I got my first job as a database engineer. It was a deskbound job which involved a lot of shift work and a lot of canteen cooked food. If I started a shift very early in the morning, I would have breakfast before I got to work and then a cooked breakfast once I got there. That was followed by a cooked meal at lunchtime and another cooked meal when I got home. The chocolate machine was also not far from my desk. It sold five-finger KitKats and with a chocolate addiction like mine - resisting them was impossible. In fact, if I'm honest, I was probably getting through 5 or 6 different chocolate bars a day and it all began to add up.  By the time I hit 26 stone, my knees packed up during a game of squash and from then on the weight just kept piling on.

When I looked in the mirror I always just saw a chubby person, but now, at 33 stone, it started to bother me. As a man, once you get past a 44" waist you can't really buy ordinary trousers and you have to go to specialist shops which charge a fortune and that made me miserable. I did try to remain as active as possible and although I'd try and kick a ball around with the boys, I didn't want to go swimming or do anything which would embarrass me. I still tried dieting but it was the same old story, I'd lose a couple of stone and then get back into my old habits, so the weight would pile back on again - with interest!

The day I finally realised that I had to do something about my weight, was the day I got back our holiday photos. My wife had booked a cabin by a lake so I could fish (the only thing I could do) while she and the boys went off sight-seeing. We'd all really enjoyed the break. Sitting there, though looking at our holiday snaps, I realised that we'd had two separate holidays: myself and a fishing rod; my wife and the boys. My life had become a one man show. I couldn't walk properly; I couldn't participate in family holidays; I couldn't play with my kids and I'd been given a parking space near to the door at work. I wasn't yet registered disabled but I might as well have been.

My GP told me getting my jaws wired was not the answer but I was so desperate by this time, I'd do anything. I'd already looked into the future and it was very bleak. My mum had already had a weight related stroke and was paralysed down the right side of her body. I thought to myself: "If I'm lucky in ten years I'll be dead, if I'm unlucky I'll be like mum."

So with help from my GP and my own internet research I eventually came across Dr. Pollard in Leeds. I suppose I was very blunt with him, asking: "So how many have you killed?" It turns out only 4 people had died out of the 1300 he'd operated on, which I thought gave me pretty good odds. Then it was his turn to do some straight talking. He told me that my life expectancy was about 50 years, at best; and I was very lucky I didn't already have diabetes.

He suggested Roux-en-Y gastric bypass surgery - but as my PCT didn't deal with him I would have to go privately. Luckily, I had some money saved for a rainy day. I told myself: "This isn't a rainy day, it's absolutely pouring it down." So, after talking to my wife, we decided to use our savings to have the operation done privately, as I felt he was the right man for the job and the NHS waiting list was too long.

So in 2005 I went ahead. I can't pretend that I wasn't absolutely petrified and worried that I might never see my family again, but I suppose I knew there was no alternative. I needn't have worried though, as I was out of hospital after four days. I'd had a bad reaction to morphine, which meant I couldn't take it for pain relief, but for the first time I began looking ahead.

I can't pretend it was all plain sailing. Although I lost 2 stone in the first two weeks, I was being fed purified food, as this is all your allowed to eat whilst you new stomach is settling down. I felt like a baby and I detested it. I became very low at times, as the awful food and my poor mobility really affected me. I was also sick - a lot. But I hung onto the positives. Every day I began to walk a bit further, the anti sickness medication began to work; I stood on the scales; and life started to get brighter. That was three years ago.

Today I'm around 14 stone. I take part in mountain bike marathons. In fact, I've just spent a lot more than I should on a new bike. The boys love coming with me, and we go away camping as a family. I coach my youngest son's football team. I run the line for my eldest son's football team. I play golf, squash, badminton and I go to the gym three times a week. Life couldn't better. Don't get me wrong though, having surgery is in no way a quick fix or an easy option. It is a major operation and can have complications - I still suffer from sickness even now. I still have body image issues as I am left with excess skin - I've just had a double gynacomasteoplasty to remove skin from my chest. Also the gastric bypass won't fix what's going on in your head. If you have a troubled relationship with food, that won't go away unless you work at it. I had a counselling for a year and a half and that really helped. At the end of the day though - you've only got one life, so go and live it.