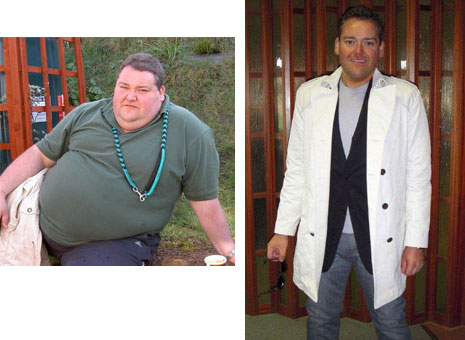 "I love being anonymous now that I've lost nearly 20 stone!"

Anthony Hall, 37, who lives on the Isle of Man where he owns a guest house and runs a taxi business, has a truly incredible story to tell of his battle with obesity. After a duodenal switch operation performed in 2007 by the UK's premier weight-loss surgery team, Phoenix-Health, he lost nearly 20 stone - more than half his body weight. Further cosmetic surgery to remove almost 1 stone of excess skin completed Anthony's transformation.

'I started putting on weight as a teenager,' says Anthony. 'In my early twenties I hit 20 stone - that was a big landmark when I thought I needed to get the weight off. I got down to 12½ stone with Weight Watchers, but the minute you stop dieting it creeps back on - with interest! When I hit 30 stone in my early thirties I thought I'd got to do something, but I reached my heaviest a few years later - a massive 34 stone.'

Anthony believes his weight problems started while he was still at boarding school. The myth of awful school food proved all too true for him, but with a twist: 'The food was terrible. I'd come home in the holidays with my clothes hanging off me, so I'd make up for it by eating lots - and this started the "yo-yo" effect on my weight.'

Ironically, Anthony had always eaten healthily, but it was the combination of large portions and a poor lifestyle that soon began to cause him problems. 'I never had ten Big Macs and a bucket of fried chicken; in fact I've never liked that kind of food. I ate good food - only too much of it.'

Eight years as a taxi driver working nights meant he'd get in at 7 in the morning and have his last meal of the day before going straight to bed. That was the point in his life when his weight simply shot up. 'I'd just become a dad, bought a house and was under a fair bit of financial pressure, so I was spending 90 hours a week driving a taxi and not a lot of time exercising. I was caught in a financial trap - working flat-out, not worrying about my weight.'

Anthony's ever increasing size never really stopped him from doing what he wanted though. He enjoyed swimming and he still went out with friends and had a good time, but he had also become the object of other people's curiosity and rudeness. 'Before I lost weight - you wouldn't believe the comments! Air travel was a nightmare - they'd always have to ask me if I wanted a belt extension. Just going into a restaurant or walking down the street I'd draw stares. Total strangers would come up to me and ask how much I weighed. Young children and the elderly were the worst.'

By now Anthony had become very concerned about his weight and he knew he had to do something about it. Over the years he'd been on umpteen diets, and he'd been seeing doctors and dieticians for many years more. At this point he didn't have any other health issues, except for sleep apnoea, but his doctor told him it was only a matter of time before he developed more serious problems.

It was about this time, in the early 2000's, that weight loss surgery was coming into the public eye. A friend of Anthony's had undergone a gastric bypass - the Roux-en-y procedure - and it was very successful. 'She told me once you have it done you have to live your life a certain way. You can't cheat. I knew if I had the op I would have to eat healthily or it would make me ill.'

Anthony had researched weight-loss surgery for two years before his doctor finally referred him to specialist bariatric (weight-loss) surgeon David Kerrigan and his Phoenix-Health team at the University Hospital Aintree. 'Mr Kerrigan said I was an ideal candidate, still young and with no outstanding health issues and he thought the duodenal switch would be the best procedure for me. I was perfect for the op, in fact, but I was refused NHS funding. So I remortgaged my house and had it done privately with Mr Kerrigan instead.'

Anthony was booked for his duodenal switch procedure on 11 April 2007 at the University Hospital Aintree, but he was naturally a little apprehensive. He was so big the Phoenix-Health team initially thought their surgical instruments wouldn't be long enough, and they considered doing the procedure in two stages. 'When I checked in they put me in a big green robe. As we came out of the ward and into the lift, an old woman grabbed her husband and said "Look at the size of that man!" If I'd had any last minute thoughts of pulling out, they vanished when I heard them. Their comment helped me, but it upset my wife - she nearly hit the woman over the head with her handbag!'

Anthony's duodenal switch took eight hours, but it was a success and he suffered no post-operative complications. 'The Phoenix-Health surgical team and staff were absolutely fantastic. The anaesthetic was the most frightening bit for me, but the Phoenix-Health anaesthetist was very good and reassuring so in the end I had no worries at all.'

Weight started to fall off Anthony and 18 months later he had stabilised at 14 stone. 'I've been 14 stone ever since - except for when I went skiing in France and got food poisoning. I went down to 13 stone but had soon gone back to 14, which is the weight that my body likes best.'

It's now three years since Anthony had his op and since then he's lost a total of nearly 20 stone. 'The anonymity I enjoy now is fantastic! Travelling is far better; I love playing with my children; I ride my mountain bike on the promenade; I roll on the carpet with the baby. At the moment I'm doing renovations on the hotel with a builder friend - it's great to be able to run with sacks of rubble on my back, doing physical stuff.

'Before my op I was very restricted in what I could wear - just jogging bottoms and polo shirts ordered mail order off the Internet. Now, it's just fantastic to have a whole wardrobe of clothes to choose from when I go out for a meal. Before, I just had one "going out" suit that I didn't feel comfortable in. '

The downside of Anthony's weight-loss, if you can call it that, was that he ended up with a big 'baby belly' - an apron of skin left from where he had lost the weight. 'I wanted a tummy tuck. Someone put me in touch with the TV entertainment company Endemol UK who were looking for men thinking of cosmetic surgery to enhance their appearance. I emailed them on the Thursday night saying I'd lost 20 stone and wanted a tummy tuck. A couple of hours later the phone rang and it was Endemol. I thought it was one of my mates having me on!'

'We think you've made a typing error Mr Hall,' the lady on the phone said. 'In your email it says you lost 20 stone.'

Then they asked him for before-and-after photos, which Anthony sent them, and minutes later they rang him back. 'Can you come to London tomorrow if we sort out your flights for you?'

Next morning he was on a plane to London. At Heathrow there was a chauffeur-driven car waiting to pick him up and whisk him to Endemol's studios at Shepherd's Bush for a screen test. The reason they'd rushed Anthony to London was because they'd already decided on the people they were picking for the show, but when they saw his photos they decided just had to get him over.

The decision was made on the following Monday - the same day that Anthony's wife announced she was pregnant. 'Then the phone rang and it was Endemol. They said they wanted to do a make-over on me. Well, how much good news could I take?'

Anthony saw the plastic surgeon who told him he could have anything he wanted done. 'He pointed out I had a turkey neck. Then he told me to strip off so he could have a good look. He noticed the weight had come off my left hand side better than the right, which meant that my right breast was slightly larger than my left. So he said he'd do my neck, make my breasts even through liposuction - and do the apronectomy.'

Once he'd had his cosmetic surgery, Channel Four's 'Extreme Male Beauty' programme sent Anthony off to the dentist for veneers; then they took him clothes shopping; and finally he was booked in at a hair salon for a restyle. 'My wife travelled with me for "the big reveal," which actually took 15 takes and she had to pretend each time it was the first time she'd seen the new me!'

Anthony's advice to others who are thinking of weight loss surgery is don't delay. 'If I hadn't had the duodenal switch I certainly wouldn't be 14 stone now - I'd still be enormous and hanging on for grim death. You have to look at the bigger picture and research every last detail - there are people out there who've had it done, but for whom it's not been successful.'

Anthony is quick to point out that weight-loss surgery is a tool and not a magic bullet: 'It doesn't fix the other issues that might be going on in your life, and if you want to make it work you have to abide by the rules.

'It was definitely the right decision for me though as I now have a full and active life again.  My only regret is not having it done sooner."