The Lazy Person's Guide to Exercise

The Lazy Person's Guide to Exercise

I hate it, I do not have a clue how I came to be writing this piece. I have avoided it since birth. I was delivered by caesarian section to avoid effort on my own part. At school my nickname was "sicknote", I had every imaginable disease which disallowed exposure to exercise.

When I couldn't get a note I would simply play truant. If only I had expended as much energy into games as I did to avoid them, I would have been an athlete. Even now, the sight of training shoes and tracksuits brings me out in a cold sweat. One of my PE teachers, who must be in his 60's now, is spotted regularly in Tesco and I still run the other way at quite a fair lick. 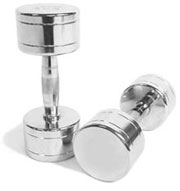 Anyway, the joke's over.  Those two chuckle muscles may be the last you use as a result of this piece.

Some things I know are true. If energy intake is greater than output the remaining energy will be laid down as fat. Forget all the malarkey about big bones etc that's it.  Those of my friends who have had surgery and done well have almost universally increased their exercise. Some have become gym fanatics, that's cool it works for them.  Others have just become more energetic.
First of all, how much can you do now?  If you are anything like me it's not much. Walking for me was less than 100 yards and my joints screamed in pain and sweat pumped out.
I had to go the gym for a "baselining" assessment.  "What should I wear?" said I. The joker says "something loose". He was BMI 20 wearing a track suit eating Mars bars and drinking a protein shake. Seriously, if you can get some old clothes like a t-shirt or jogging bottoms, then do so. I managed to get them in 7xl so most of the people on the site should be OK. A pair of trainers is a must - maybe you need some slip ons (I couldn't do my own at first). If you need internal reinforcement get some of the old magic knickers or some other Spandex type product.

You don't need to go to the gym, sign a standing order form and do nothing to get fit. Just send me the same amount of money and you can stay at home and I will tell you that you look better and do the exercise for you. 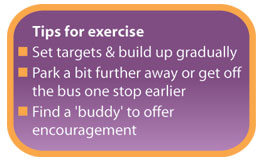 In fact I would suggest the gym is bad. (In the early days) they are scary places. Let's build your confidence up. Take walks under cover of darkness if necessary. Somewhere flat is good. Early days I did wrap myself in cling film and drive myself to nearby a promenade at night till I noticed everyone giving me funny looks when I emerged breathless in my tight clingfilm undergarment. I have since been told it's a popular cruising area (no nautical pun implied).

I could walk about 20 paces post op so I decided to add 10 paces every 3 nights and increase my tolerance gradually. I got a pedometer. It said 10000 a day - I did 8500 one day and nearly died. All I would say is get one and try it - build up by percentages, set targets. Some people do well by getting a buddy to inspire you, confide in or just go to the chippy for you when you can't walk (ignore that). 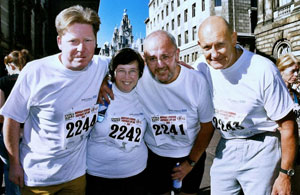 There was a man at our gym, on the staff, who took an interest in my training. He helped me set targets and encouraged me. He got me to enter a 5k road race. Up until then I had only ever taken part in the human race. (Pictured above).

Try going up and down the stairs more. Fidget more, it's been proven that people who fidget more weigh less. Well, Miss Pritchard, Class 5 Springwood school, I firmly blame my obesity on you. Fidgeting was a crime punishable by death in her class. Trouble was she never really properly defined it. I would just sit and squirm uncomfortably every time she called my name.

Consider a pet to help you get more exercise - I am thinking more golden retriever than goldfish.

Try parking further away from the entrance when you go the supermarket. Go for a walk, get some fresh air and nature in your lungs (I am a city boy).

Swimming is good, I believe, but I can't swim. I was frightened at an early age by Rolf Harris in a TV advert.   I found the offending piece onYouTube

So, after deciding I was very badly qualified to do this piece here are some links

So in conclusion find something that suits you, learn to love it and you will do better than me.