My Route to DS abroad

When I sit down and think about it, it seems quite mad to go to a foreign country and have major surgery at the hands of a surgeon you have never met.

Yet in April 2004 that was precisely the journey I was about to embark upon. I had languished on the NHS waiting lists for about 18 months, with no date for surgery on the horizon. I had been referred to the only surgeon within 150 miles who did bariatric surgery and I was desperate for the vertical banded gastroplasty (VBG) I had been offered.

Signed off work due to depression, and becoming increasingly isolated, I wasn't very sure how long I could continue waiting. Mentally numb and aching from the weight I was carrying around, the daily struggle that was life did not seem worth it.
My parents, who are by no means wealthy, decided enough was enough and decided to fund private surgery, using the money my mum had just inherited from her father.

So my research began. Now that I was able to choose which surgeon to go to, I realised that I didn't have to stick to the VBG which was the only surgery I had been offered.

Banding didn't appeal to me. I would have had no patience with fills. Through my research on WLSinfo I decided that RNY was the op for me and that the surgeon I wanted was Jacques Himpens in Belgium. I won't deny that my initial attraction to surgery abroad was the price, however I discovered that Jacques came highly recommended and was extremely experienced. 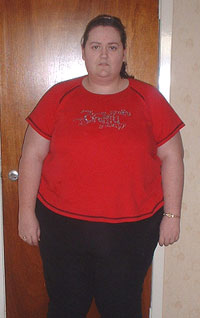 I contacted him through email and he suggested that the DS might be more suitable at my BMI, and with my eating habits. I was horrified. DS was the scary op that I had seen mentioned, but which seemed complicated to live with and much more serious than any of the others.  Yet as I did more and more research, I had a breakthrough. The idea of a DS didn't seem so intimidating and in fact the long term results which were coming out of the USA were very positive.

My surgery was booked for mid April and as the day approached I went mad with 'last supper syndrome'. Despite all I read, I was convinced I would not be able to eat a meal again.
Flying over to Belgium, with my mum and aunt I was reminded of why I was doing this. I couldn't do up my seatbelt on the plane. I couldn't lower the table to eat my meal off (some might say that was a lucky escape!)  The sheer effort of walking a long distance through the airport made my feet ache, and the sweat was dripping off me.

Arriving early the next morning at the St Blasius hospital in Dendermonde I was taken aback by how clean and luxurious it was. The staff were incredibly friendly and I was relieved to discover that they spoke excellent English. I was given 'something' to relax me and was taken down to the pre-surgery waiting area. I must have drifted off and the next thing I knew, Jacques was tickling my nose and asking if I was ready. In my sleepy state, I just smiled at him and nodded.

I woke up panicked as I was being sick and was extremely disorientated. Seven hours after my surgery began I was taken back to my private room, where my mum and aunt were anxiously waiting. Once they had seen that I was fine and that I was in safe hands, they were happy to go home for the night.

My first night was difficult as I was sick with every sip of water, but I was cared for by a wonderful nurse who changed my night clothes and gave me pain killing injections in my behind, each time I 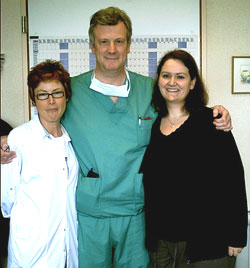 asked.  By 7am the next morning I had turned a corner, and I phoned my dad back in the UK, who was so shocked to hear from me, he thought it was one of my friends playing a trick. I told him I felt wonderful, although I now realise this was morphine induced!

I stayed in St Blasius for 3 nights, until I had managed to eat a spoonful of yoghurt and kept fluids down. I was then taken to the guest house in Ghent where my mum and aunt were staying. The room was in the attic and I really struggled to make it up the stairs as I was very weak.  With hindsight I should have stayed longer in the hospital, however I had been so adamant that I was ready to leave, that I could not be persuaded otherwise.

Three days later we set off for Edinburgh and the journey was not easy. I couldn't walk very far as I was so weak, but the airport staff were very helpful and took me by wheelchair to the aircraft. When I landed on the runway in Scotland, I burst into tears. It was the first time I had cried since leaving just over a week before and I realised at that point that I hadn't actually expected to come back. Prior to the surgery I wasn't terribly bothered whether I woke from the anaesthetic or not. Now that I was on the other side of the surgery I suddenly started to care.

My recovery was straightforward, albeit slow. It took me a couple of months before I was able to hold a normal conversation as my head felt as though it was full of cotton wool. I believe this was a combination of lack of food and a reaction to the anaesthetic.

I don't believe that my recovery or experience in the year following my surgery was any different to that of someone who had gone for surgery in the UK. Had I suffered from complications, which are possible with any surgery, then I know that it would have caused problems being so far away from my surgeon, but fortunately I was a straight forward case.
I had my quarterly bloods done on the NHS and sent the results to Jacques by email.
At one year out I returned to Belgium with my mum to see Jacques. I believe that few people actually make the return journey after the first year, but it was something I felt I had to do.

Since then I have updated Jacques occasionally by email on my progress, or have asked the odd question, to which I have had a response within hours. I also have his mobile number which I was told I could call at any time. 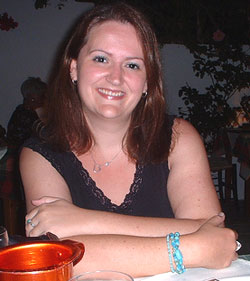 Incidentally I have recently faced my first problem as an overseas patient. I have been suffering from terrible pain after eating and Jacques advised me that I could have gall stones in the bile duct. This was something which surprised me as he had removed my gall bladder at the time of my original surgery. I asked my GP to refer me for a scan and this was carried out last week. Unfortunately the scan showed no stones and the consultant said I should be referred back to my original bariatric surgeon as he believed it was related to my DS.

When I explained that he was in Belgium, he shrugged and said it was up to my GP what to do next. So I am definitely at a disadvantage being so far from my surgeon. Jacques has made it clear that I can go over at any time, however I can't afford it. So I am left in almost constant pain and in the hands of a GP who insists on referring to my DS as a gastric band and does not know what to do with me.

In summary my experience has had both positives and negatives:

Would I do it all again?  In a heartbeat!